I really worked hard on it during the last days and weeks, but now it is there: the 2011 (beta) release of our popular CDISC ODM Study Designer.


The major new feature is a full implementation of the new CDISC "Study Design Model" (SDM) that was published for public review by CDISC just a few days ago. As this new standard (which is an extension to the ODM Standard) is still "in public review", I also designated the ODM Designer as "beta". The final 2011 version of the software will then be released once the SDM standard is approved and formally released.


You may wonder how it is possible that our new version of the ODM Designer is already there although the SDM has been released just a few days ago! The reason is simple: I was one of the co-developers of the SDM standard (together with Jan Kratky, Andrew Fowler and Peter Villiers), and in each state of the development I tested whether the proposed structure, elements and attributes were implementable in software. In our e-world, a standard that is not implementable in software doesn't make sense isn't it?


So every detail of the standard was tested on implementability, and the result is not only a good standard, but also the immediate availability of a software tool to work with it.

As such, one may say that our ODM Study Designer can be seen as a reference implementation of the new SDM standard.


By using the new standard, one can define features of a study that we not covered yet by the CDISC ODM standard (and that I already wanted to have in it for many years), such as study parameters (also required to be submitted in SDTM format to the FDA), eligibility criteria (i.e. inclusion/exclusion) - also in machine-readable format, study structure (arms, epochs, segments, activities, ...), and most important in my opinion: workflows and timings. 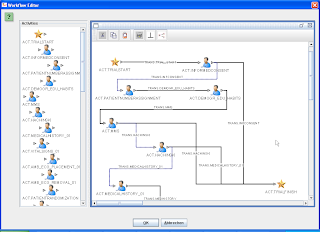 Within the team, I was responsible for the Workflow part, maybe the hardest part. Our workflow implementation is still pretty simple, e.g. not allowing workflows within other workflows, but I think we made something that is simple and easy enough to work with for people that design clinical studies. Of course one can already attach (very) complicated workflows in XML languages like BPEL, XPL, Window Workflow Foundation, or BPMN 2.0, to ODM through the vendor extension, but we wanted something that is easy to learn (the named ones have a steep learning curve) and can easily be implemented, and is still sufficient for describing >90% of the clinical workflows. 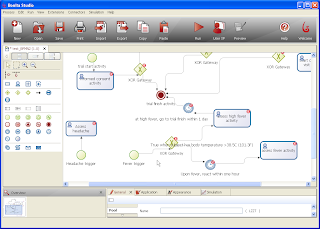 In the new ODM Study Designer I also implemented some special features that are very interesting for integration with the patient care world, and especially with hospital planning and information systems. For example, the new version of the ODM Designer allows export of the study workflow in BPMN 2.0 format, which is believed to become the most important standard for workflow definitions. Such an export (which is an XML file) can then be used in a hospital information planning system, in order to plan the clinical study within the care plan.


Another feature of the ODM Study Designer is that it allows to gerate a caBIG Patient Study Calendar (one for each arm on the study). The PSC is used by caBIG (and many other researchers) to provide a study plan for groups of subjects in a clinical study. Our export provides a PSC-XML file that can then be imported into the caBIG PSC software tool and used there.


The new Study Designer now also has a full implementation of the CDASH standards (v.1.0 and v.1.1). Users can just load CDASH forms from a repository that comes with the software, and can immediately start working with these forms.


But have a look for yourself - I already posted some information on the ODM Study Designer website, and there is also a "New features" brochure that is available on request.
Posted by XML4Pharma at 10:17 AM